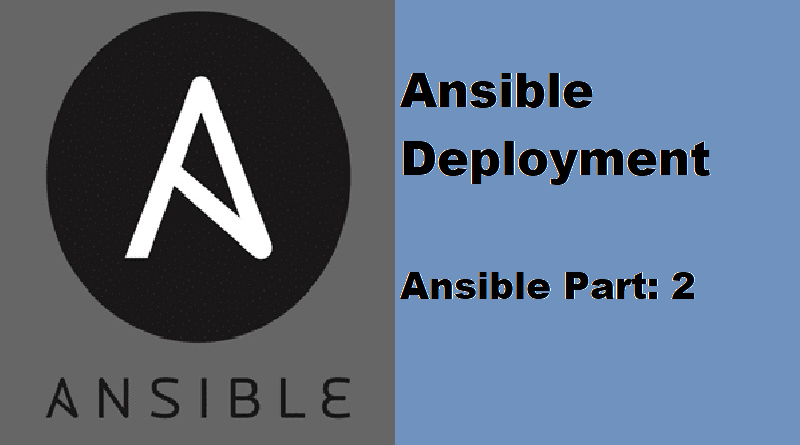 It is very simple to install Ansible.  Ansible software only needs to be installed on the control node from which Ansible will be run. Hosts that are managed by Ansible do not required to have Ansible installed. Ansible Installation involves few steps and has minimal requirements.

The control node must be a Linux or UNIX system. Microsoft Windows is not supported as a control node, although Windows systems can be the managed hosts.

Python 3 (version 3.5 or later) or Python 2 (version 2.7 or later) needs to be installed on the control nodes.

Linux and UNIX managed hosts need to have Python 2 (version 2.6 or later) or Python 3 (version 3.5 or later) installed for most modules to work properly.

We can write Ansible Playbooks for network devices using the same basic techniques that we uses when writing playbooks for servers. Because most network devices cannot run Python, Ansible runs network modules on the control node, not on the managed hosts. some  special connection methods are used to communicate with network devices, typically using either CLI over SSH, XML over SSH, or API over HTTP/HTTPS.

Ansible inventory is collection of hosts that is managed by Ansible, These hosts can be individual or can be a part og groups, which can be managed collectively. Groups can contain child groups and a host can be part of multiple groups. The inventory can also set variables that applies to the hosts and groups that it defines.

There are two ways to define host inventory

Static Inventory: It can be defined by a simple text file, and that is static.

Dynamic Inventory: Dynamic inventory file can be updated dynamically according to adding and removing the hosts. It can be generated by a script or other program as needed, using external information providers.

Static inventory file is a simple text file that specifies the managed hosts that Ansible targets. We can write this file in different formats, including INI-style or YAML. INI-style format is commonly used for static Inventory.

An INI-style static inventory file is a list of host names or IP addresses of managed hosts, each on a single line:

To organize managed hosts, we uses host groups, it allow us to more effectively run Ansible against a collection of systems. In this case, each section starts with a host group name enclosed in square brackets ([]).  This can be followed by the host name or an IP address for each managed host in the group, each on a single line.

Hosts can be part of multiple groups. Recommended practice is to organize your hosts into multiple groups, possibly organized in different ways depending on the role on the host. This allows us to easily apply Ansible plays on specific group of hosts.

there are two host groups which always exist:

Ansible host inventories can include groups of host groups. This is accomplished by creating a host group name with the :children suffix. The following example creates a new group called india, which includes all hosts from the mumbai and bangalore groups. A group can have both managed hosts and child groups as members, you could add a [india] section that has its own list of managed hosts. That list of hosts would be merged with the additional hosts that the india group inherits from its child groups.

Simplifying the Host Specifications with Ranges

We can specify ranges in the IP addresses  or host names to simplify Ansible host inventories. We can specify either numeric or alphabetic ranges. Ranges have the following syntax:

Ranges match all values from START to END, inclusively. Below are some examples:

We can use ansible command to verify a hosts presence in the inventory:

To list all hosts in a group, we can use below command:

If a inventory contains a host and a host group with the same name, the ansible command prints a warning and targets the host. The host group is ignored, in that case

There are various ways to deal with this situation, the easiest way is to ensure that host groups should not use the same names as hosts in the inventory.

default location of inventory file is /etc/ansible/hosts/ generally we don’t use the default file to configure the static inventory, we defines inventory file in same directory where we define our ansible configurations.

Defining Variables in the Inventory

Values of variables used by playbooks can be specified in host inventory files. These variables only apply to specific hosts or host groups. It is better to define these inventory variables in a separate file and not directly in the inventory file.

Inventory information can also be dynamically generated, using information provided by external databases. The open source community has written a number of dynamic inventory scripts that are available to use for Ansible projects. If those scripts do not meet our needs, we can also write our own scripts.

For example, a dynamic inventory program could contact your Amazon EC2 account or Azure account or Red Hat Satellite server, and use information stored there to construct an Ansible inventory. Script does this when we run Ansible, it can populate the inventory with up-to-date information provided by the service as new hosts are added and old hosts are removed.

Ansible looks for .ansible.cfg file in the user’s home directory. This configuration is used instead of  /etc/ansible/ansible.cfg if it exists.

If an ansible.cfg file exists in the directory in which the ansible command is executed, it is used instead of the global file or the user’s personal file. This allows administrators to create a directory structure where different environments or projects are stored in separate directories, with each directory containing a configuration file configured with a unique set of settings.

This is recommended to create  ansible.cfg file in a directory from which you run Ansible commands. This directory may also contain many files used by your Ansible project, such as an inventory, vars, and a playbook. This is the most common location used for the Ansible configuration file. It is unusual to use a ~/.ansible.cfg or /etc/ansible/ansible.cfg file in practice.

To check ansible configuration file being used and the version, use ansible –version command.

Another way to display the active Ansible configuration file is to use the -v option.

Managing Settings in the Configuration File

The directives in this file are explained in the following table:

-m & -a option: used to pass the argument, the name of module, Modules are small programs that are expected to implement the tasks. Some modules doesn’t need additional information, but some need additional arguments to specify the details of their operation. The -a option takes a list of those arguments as a quoted string.

One of the simplest ad hoc commands uses the ping module. This module doesn’t do an ICMP ping, but checks to see whether we can run Python-based modules on managed hosts or not.

To list out all the modules installed in the system use ansible-doc -l  command.

To view documentation of any module we can use ansible-doc  <module_name> command.

To learn mode about ansible modules go here
You can read more basic about Ansible in my another post ‘Ansible: Infrastructure As A Code‘

One thought on “Ansible Deployment”