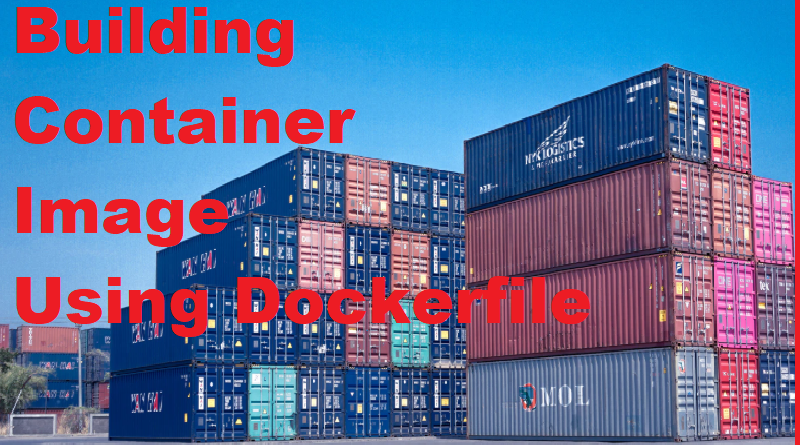 In the tutorial we are going to learn Building Container Image using Dockerfile. I am already published some article related to Containers, please visit those articles :

Dockerfile is a mechanism to automate the building of container images. There are three mazor steps to build a cointainer from dockerfile

To add any comment add hash, pound, or symbol(#) in starting of line. INSTRUCTION states for any instruction keyword for Dockerfile, it is not case-sensitive but to make it more visible keep it in capital letters is suggested.

Generally we use Exec form, it is recommended, because Shell form wraps the commands in a /bin/sh -c shell, creating a sometimes unnecessary shell process. Also, some combinations are not allowed, or may not work as expected. For example, if ENTRYPOINT is [“ping”] (exec form) and CMD is localhost (shell form), then the expected executed command is ping localhost, but the container tries ping /bin/sh -c localhost, which is a malformed command.

CMD instruction can be override when starting a container by podman / docker. If it is present, all parameters for the podman run command after the image name forms the CMD instruction. For example, following instructions cause the running container to display the current time:

ENTRYPOINT defines both commands to be executed with parameters, so  CMD instruction can’t be used. Below example provides the same functionality, with the added benefit of the CMD instruction being over writable when a container starts:

In both cases, when a container starts the current time is displayed without providing a parameter:

It overwrites the CMD instruction, if a parameter appears after the image name in the podman run command,  The following command displays the current day of the week instead of the time:

Another approach is that we can use default ENTRYPOINT and the CMD instruction to define the initial command. Below instruction displays the current time, with the added benefit of being able to be overridden at run time

If source is a file system path, it must be inside the working directory.

If  source is a compressed file, then the ADD instruction decompresses the file to the destination folder. COPY instruction does not have this functionality.

Above example is not a good practice when creating container images. It creates three layers (one for each RUN instruction) while only the last is meaningful. You can achieve the same objective while creating a single layer by using the && conjunction like below:

We get readability issue while writing many RUN in a same line but using \ escape code we can break the lines and make it readable:

This also creates only one layer, and improves the readability. RUN, COPY, and ADD instructions create new image layers, but RUN can be improved this way.

Recommendation is to applying similar formatting rules to other instructions accepting multiple parameters, such as LABEL and ENV:

The podman build command used to builds a new image based on the instructions in Dockerfile . The syntax for this command is as follows:

DIR is the path of working directory, which must be included in the Dockerfile. If working directory is current directory it can be defined by a dot (.) . NAME:TAG is a name with a tag given to the new image. If TAG is not specified, then the image  automatically tagged as latest tag.

You can read more about container architecture