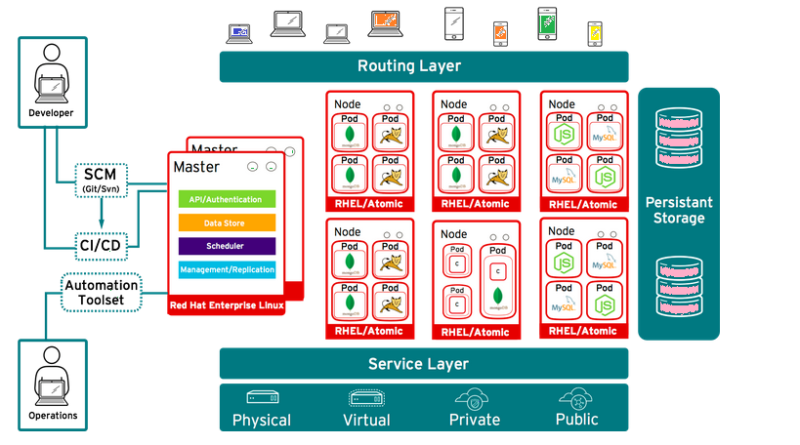 The pod scheduler determines placement of pods onto nodes in Openshift cluster. The default configuration shipped with OpenShift Container Platform supports the common data center concepts of zones and regions by using node labels, affinity rules, and anti-affinity rules. It is designed to be highly configurable and adaptable to different clusters.

The scheduler filters the list of running nodes by evaluating each node against a set of predicates, such as the availability of host ports, or whether a pod can be scheduled to a node experiencing either disk or memory pressure.

A pod can also requests for compute resources such as CPU, memory, and storage. Nodes that have insufficient free computer resources are not eligible.

Additionally, a pod can define a node selector that matches the labels in the cluster nodes. Nodes whose labels do not match are not eligible.

Another filtering check evaluates if the list of nodes have any taints, and if so whether the pod has an associated toleration that can accept the taint. If a pod cannot accept the taint of a node, then the node is not eligible. By default, master nodes include the taint node-role.kubernetes.io/master:NoSchedule. A pod that does not have a matching toleration for this taint will not be scheduled to a master node.

The list of candidate nodes is evaluated using multiple priority criteria that add up to a weighted score. Nodes with higher values are better candidates to run the pod.

A common use for affinity rules is to schedule related pods to be close to each other, for performance reasons. An example is to use the same network backbone for pods that synchronize with each other.

A common use for anti-affinity rules is to schedule related pods that are not too close to each other, for high availability. An example is to avoid scheduling all pods from the same application to the same node.

The node list is sorted based on above matrix scores, and the node with the highest score is selected to host the pod. If multiple nodes have the same high score, then one is selected in a round-robin fashion.

To maintain large data centers, such as cloud providers a common topology is to organize hosts into regions and zones.

The standard configuration of the OpenShift pod scheduler supports this kind of cluster topology by defining predicates based on the region and zone labels. The predicates are defined in such a way that: 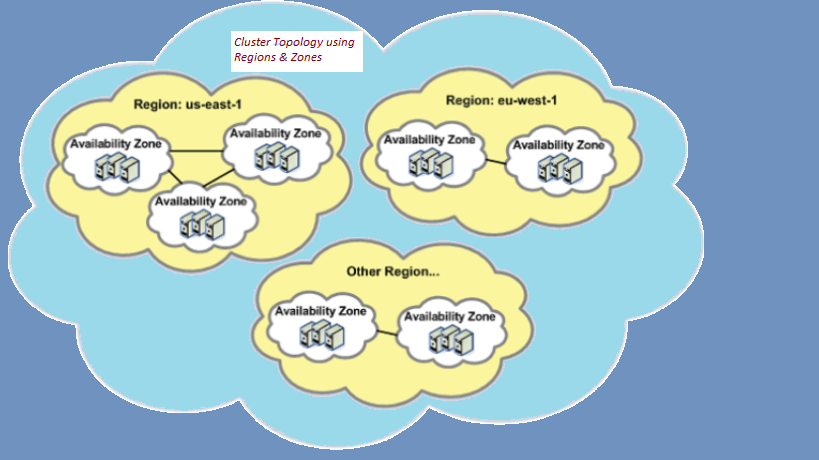 We can add additional labels to the nodes. For example, we might label nodes with the env label using the values of dev, qa, or prod with the intent that development, quality assurance, and production workloads will be deployed to a specific subset of nodes. The labels we choose are arbitrary, but we must publish the labels and their associated values to our developers so that they can configure their applications appropriately.

Use oc label command to immediately add, update, or remove a node label. For example, use the following command to label a node with env=prod:

Use the --overwrite option to change an existing label.

Remove a label by specifying the label name followed by a hyphen, such as env-.

Use the --show-labels option with the oc get nodes command to see the case-sensitive labels assigned to a node.

A node might have several default labels assigned by OpenShift. Labels whose keys include the kubernetes.io suffix should not be changed by a cluster administrator because they are used internally by the scheduler.

Cluster administrators can also use the -L option to determine the value of a single label. For example:

Multiple -L options in the same oc get command are supported. For example:

Although node labels are persistent, if your OpenShift cluster contains machine sets (created if your cluster was installed using the full stack automation method), then you should also add labels to the machine set configuration. This ensures that new machines (and the nodes generated from them) will also contain the desired labels.

You can identify the relationship between machines and nodes by listing machines in the openshift-machine-api namespace and including the -o wide option.

Machines used for worker nodes should come from a machine set. The name of a machine contains the name of the machine set from which it was generated.

We can also edit a machine set so that new machines generated from it will have the desired label or labels. Modifying a machine set will not apply changes to existing machines or nodes.

The highlighted lines below show where to add a label within a machine set.

Many infrastructure-related pods in an OpenShift cluster are configured to run on master nodes. Examples include pods for the DNS operator, the OAuth operator, and the OpenShift API server. In some cases, this is accomplished by using the node selector node-role.kubernetes.io/master: '' in the configuration of a daemon set or a replica set.

Similarly, some user applications might require running on a specific set of nodes. For example, certain nodes provide hardware acceleration for certain types of workloads, or the cluster administrator does not want to mix production applications with development applications. Use node labels and node selectors to implement these kinds of scenarios.

A node selector can be added or modified using either the oc edit command or the oc patch command. For example, to configure the myapp deployment so that its pods only run on nodes that have the env=qa label, use the oc edit command:

Whether using the oc edit command or the oc patch command, the change triggers a new deployment and the new pods are scheduled according to the node selector.

Configuring a Node Selector for a Project

To configure a default node selector for an existing project, add an annotation to the namespace resource with the openshift.io/node-selector key. The oc annotate command can add, modify, or remove a node selector annotation:

Scaling the Number of Pod Replicas

To know more about regions and zones, please go here