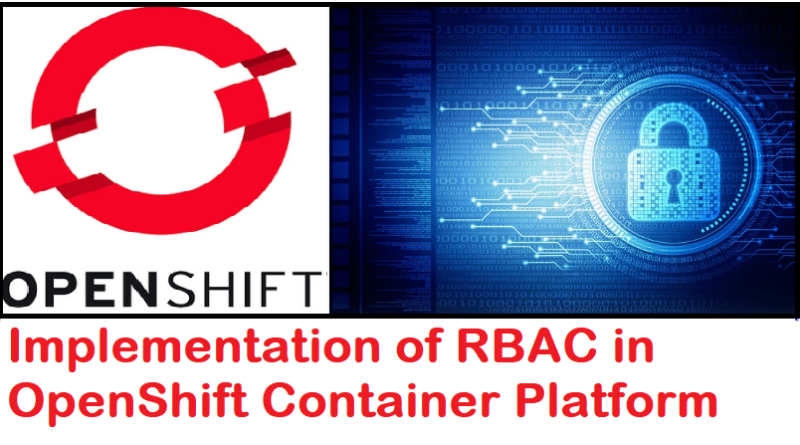 Role-based access control (RBAC) is a technique for managing access of resources in system. In OpenShift, RBAC determines if a user can perform certain actions within the cluster or project. There are two types of roles that can be used depending on the level of responsibility of the user: cluster role and local role.

There are 3 major objects in RBAC

OpenShift defines two groups of roles (cluster roles and local roles) and bindings depending on the scope and responsibility of users.

OpenShift also provides a set of default cluster roles that can be assigned locally or to the entire cluster. We can modify these roles according to the requirements to access control the OpenShift resources.

To add a specific role to a user, we can use add-role-to-user command.

For example, to add the user developer to the role basic-user in the nodejs project:

To add a cluster role to a user, use the add-cluster-role-to-user subcommand:

example, to change a regular user to a cluster administrator, use the following command:

To remove a cluster role from a user, use the remove-cluster-role-from-user subcommand:

example, to change a cluster administrator to a regular user, use the following command:

Rules are defined by an action and a resource. i.e, the create user rule is part of the cluster-admin role.

We can use the oc adm policy who-can command to determine if a user can execute an action on a resource. For example:

There are mainly 3 types of users.

This type of user represents a user that has been allowed access to the platform. Regular users are represented with user object. This is the most interactive way to access OpenShift Container Platofrm.

System users include a cluster administrator (with access to everything), a per-node user, users for use by routers and registries, and various others. Many system users are created automatically when infrastructure is defined, mainly for the purpose of enabling the infrastructure to securely interact with the API. An anonymous system user also exists that is used by default for unauthenticated requests.

Service accounts are generally used to give extra privileges to pods or deployment configurations. Service accounts are represented with the ServiceAccount object. These are special system users associated with projects; some are created automatically when the project is created, and project administrators can also create more for the purpose of defining access to the contents of each project.